I was speaking to my mum on the phone today, when my dad came on the line specifically to tell me that he read my post reproducing James Thurber’s retelling of Little Red Riding Hood, and that he enjoyed it very much. My mother added from the background that it was delightful.It’s a bit unsettling at first to know one’s parents reads one’s blog, but I’m quite kicked, really, to play parent, and introduce them to new things, the way they introduced them to me once. So here is an excerpt from another re-telling of the Little Red fairytale, this time by Roald Dahl. It’s a favourite of mine, despite raising contemporary concerns of gun-violence, the fur trade, and encouragement of cruelty to animals.

The action below begins after the wolf has eaten Red’s grandmother, and is preparing to eat Red once she arrives. 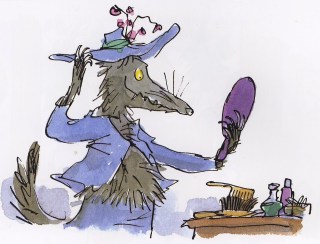 He quickly put on Grandma’s clothes,
(Of course he hadn’t eaten those).
He dressed himself in coat and hat.
He put on shoes, and after that
He even brushed and curled his hair,
Then sat himself in Grandma’s chair.

In came the little girl in red.
She stopped. She stared. And then she said.
“…But Grandma
what a lovely great big furry coat you have on.”
“That’s wrong!” cried Wolf. “Have you forgot
To tell me what BIG TEETH I’ve got?
Ah well, no matter what you say,
I’m going to eat you anyway.”

The small girl smiles. One eyelid flickers.
She whips a pistol from her knickers.
She aims it at the creature’s head
And bang bang bang, she shoots him dead. 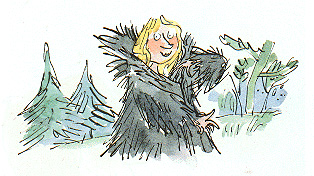 A few weeks later, in the wood,
I came across Miss Riding Hood.
But what a change! No cloak of red,
No silly hood upon her head.
She said, “Hello, and do please note
My lovely furry wolfskin coat.